The church cemetery contains a history of early Scarborough. The Thomson family were the first settlers of Scarborough and the church and cemetery sit on land that was once part of the Thomson farm. The photo below shows the cemetery fence and this is the approximate boundary between the two Thomson farms. The cemetery sits on part of what was David Thomson's farm on a land patent issued in 1802 by King George III.  The land that the present church building sits on was once part of Andrew Thomson's farm.  His original house still stand on the north side of St. Andrew's Rd. between the church and McCowan Rd.

The cemetery contains about 1800 graves and covers about one acre.  The names on the headstones bear the names of many of Scarborough's early settlers.

The small white building standing in the north-west corner of the cemetery is the sexton's house built in 1883. It is now designated as an historic site.

People are invited to tour the cemetery grounds. We ask that you do so with care and respect the heritage.

On a farm within a wood
A Church is now where maples stood.
A traveler down this gentle road
is welcome here at God's abode.

The stones upon the churchyard tell
of those who worshiped, toiled and fell.
They passed the faith of their salvation
to each succeeding generation.

Lord we pray, please help us merit
As you decreed we should inherit.
This place where song and prayer are heard
Respect is given to Your Word.

Now sons and daughters hear my prayer
to keep this Church in good repair.
First you must know this Church is not
the brick and stone from which it’s wrought.

‘Tis built on all that did their part,
who worked with hand and mind and heart.
We see their graves but count no loss,
For they kept the Book and awed the Cross.

The plaque below is on a monument in the N.E. corner of the cemetery: 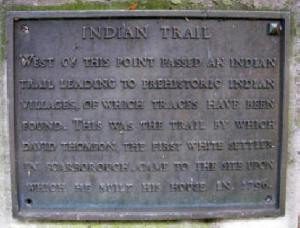 This monument is shown as #4 on the downloadable walking tour map above.

The villages mentioned on the plaque are most likely those of the Mississauga, who are a group of First Nations People of the Anishinabe. Located in southern Ontario, they are closely related to the Ojibwe.  The name "Mississauga" comes from the Anishinabe word Misi-zaagiing, meaning "[Those at the] Great River-mouth."

The Anishinabe, included Ojibway, Odawa and Potowatomi, and were members of Three Fires Confederacy, and are the third largest Indian community in North America, surpassed only by the Cherokee and Navajo. They are primarily located around the Great Lakes region. There remain some 42  Anishinabe First Nation communities around the great lakes and southern Ontario, with the Mississaugas of the New Credit being one of the closest First Nation communities to Scarborough.

Called "Chippewa" in the United States and "Ojibwe/Ojibway" in Canada, they call themselves Anishinabe meaning "first men". They accept the name "Ojibwe", even though they prefer Anishinabe. The majority of Anishinabe in Canada would be Ojibway but there remain some Odawa and Potowatomi in Ontario.